Why does my model not show up after an import?

The most common reason to why a model does not appear after an import is that the model existed earlier in the repository but has been removed. If the choice “Overwrite existing content if it is older” was selected during the import the action “Remove model” may have been the latest event for the model and it will not be imported. To verify if this is the problem, run the import again and look under the tab “Details” when the import has finished: 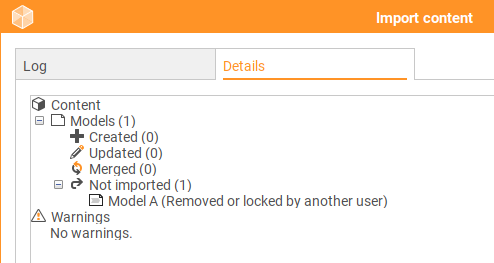 To force the import of the model, run the import again and select the option “Always overwrite existing content”:

Get started for free